You can only measure the visibility accurately if sailing & motoring in fog when you have another object in sight so assume that it is less than you think. It can take time to ‘see’ another vessel as you may not be looking directly at it when it first appears.

You should be able to stop in half the distance of the visibility because a conflicting vessel will need a similar distance to stop. Slow speed is demanded.

Keeping a lookout in fog at sea

Post a crew member to keep a visual lookout, preferably stationed outside as you will be monitoring the radar and the chart plotter as well as trying to keep a lookout.

Radar is an important aid in fog but don’t expect it to pick up all the vessels around you particularly when the sea may be lively and wave clutter obstructs the centre of the display, obscuring small vessels.

The autopilot can be vital in fog as it avoids you having to concentrate on the steering and allows you to focus on the navigation. Make sure you know where the disconnect button is in case you need manual steering in a hurry.

You will not get many visual clues in fog so you will be heavily reliant on the chart plotter and/or the radar. Use both to check each other as well as the depth sounder.

Radiation fog is the one you get in the early morning mainly in harbours and it should clear when the sun warms things up. Advection fog is found at sea when warm moist air flows over a cold sea and needs a change of wind or sea temperature before clearing.

Ideally you should not be under sail in fog. You may not be able to manoeuvre quickly, the sail can obstruct visibility and white sails do not show up in fog.

Allow larger safety margins in fog particularly for making a landfall. Moderate your speed so you can stop or take avoiding action in good time.

Have the navigation lights on even in daylight and if you have a searchlight have that one as well facing forward. The radar reflector should be up and working. 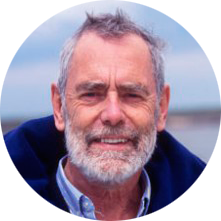 Dag Pike began his career as a merchant captain, went on to test lifeboats, and took up fast boat navigation, winning a string of trophies for powerboat races around the world, including navigating Richard Branson’s Virgin Atlantic Challenger on the record-breaking fastest Atlantic crossing by powerboat.

He is now a navigation and powerboat journalist in demand all round the world.