Man Overboard Drill – Getting the MOB aboard 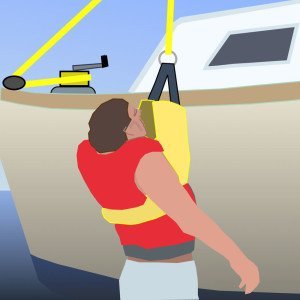 Man Overboard Drill – Getting the MOB aboard

Getting an MOB aboard a boat can be very challenging. The MOB is likely to be exhausted, shocked, cold or injured and will have little strength to help themselves aboard.

• Once alongside, tether MOB to the boat using a line looped around their arms with a bowline

• Ensure boat is stopped and engine in neutral• An uninjured, conscious MOB may be able to be helped aboard by another crew member in calm conditions via a stern ladder or bathing platform

• Deploy a sling and lifting tackle prepared for the purpose. Attach the tackle to the boom or main halyard and lift casualty aboard by pulling on the pulley or via a winch block hoisting the halyard

• There are many types of kit available designed for retrieval and recovery of an MOB including throwing strops, inflatable horseshoes, rescue slings and parbuckles

• A 5:1 pulley and rope slung over the boom will improve the ability to recover a MOB if specialist kit is not aboard