How to respond to crew overboard under sail 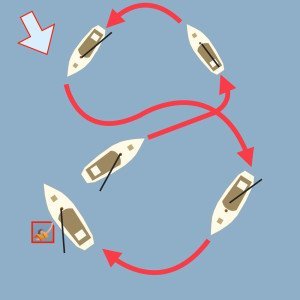 • Keep the MOB in sight

• Tack into the heave-to position, do not adjust the headsail sheets

• If under spinnaker, alter course to windward and haul sail down immediately

• Throw buoyancy to the MOB

• If within earshot of MOB reassure them you are manoeuvring into recovery position• Steer onto a beam/broad reach and sail away• Sail for about 5 or 6 boat lengths• Tack, aiming the leeward side of the yacht at the MOB

• Let out the headsail and mainsail sheets until the main flaps

• Keep the angle of approach as a close reach, so the sails can be powered and de-powered under full control

• Use one sail only in breezy conditions

• Approach the MOB slowly. Don’t be tempted to approach too quickly

• Pick up the MOB to leeward, aft of the mast

• In light conditions, approach MOB to windward and drift down towards casualty so they can be recovered on leeward side

(taken from the Safe Skipper app for iPhone, iPad & Android)