A skipper should know how their boat will cope with rough seas. By working within known limits and understanding the risks, then the chances of a capsize occurring are much reduced.

Safety is all about improving the odds. When considering the odds of a boat capsizing, knowing the limitations of its design and stability are critical. In order to do this, it helps to understand the basic principles of how a boat remains upright.

To keep a boat stable in the water and prevent it from toppling over requires the centre of gravity to be low, which is greatly helped by having a deep, heavy keel and an engine below the waterline. 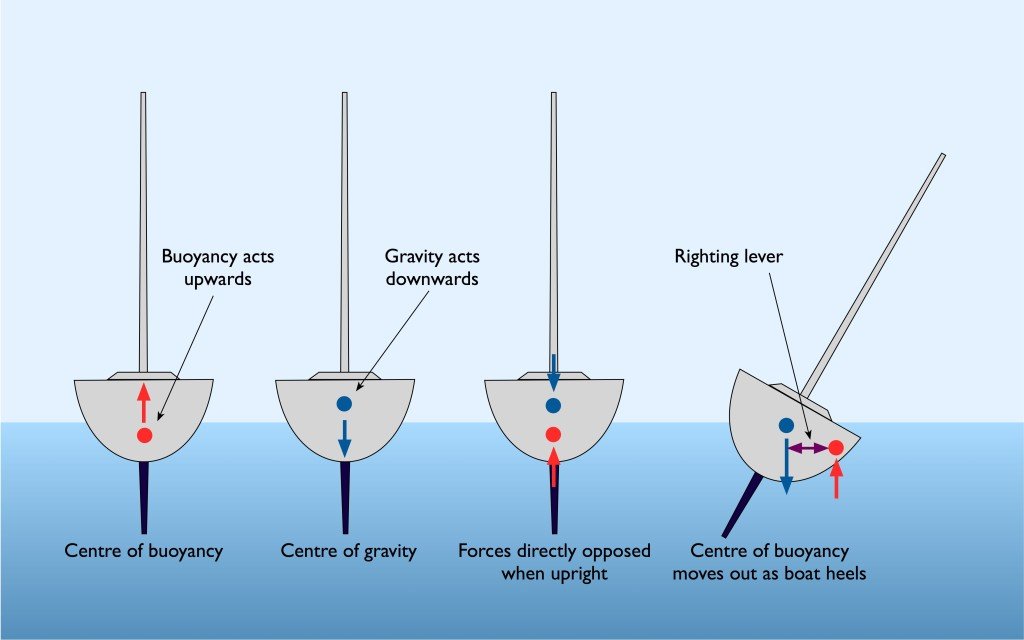 If a sailing boat heels over in a strong gust of wind or is forced over by a big wave, then it will right itself once the gust or wave has passed. When a boat is upright then the force of gravity is directly opposed to the force of buoyancy.  As the boat heels over the centre of buoyancy moves outwards and acts as a lever does, pushing upwards with an increasing force. This is fine up to a point, but eventually as the boat continues to heel the righting lever effect reduces and eventually is lost and then the boat will capsize and float upside down. This point is known as the Angle of Vanishing Stability (AVS). 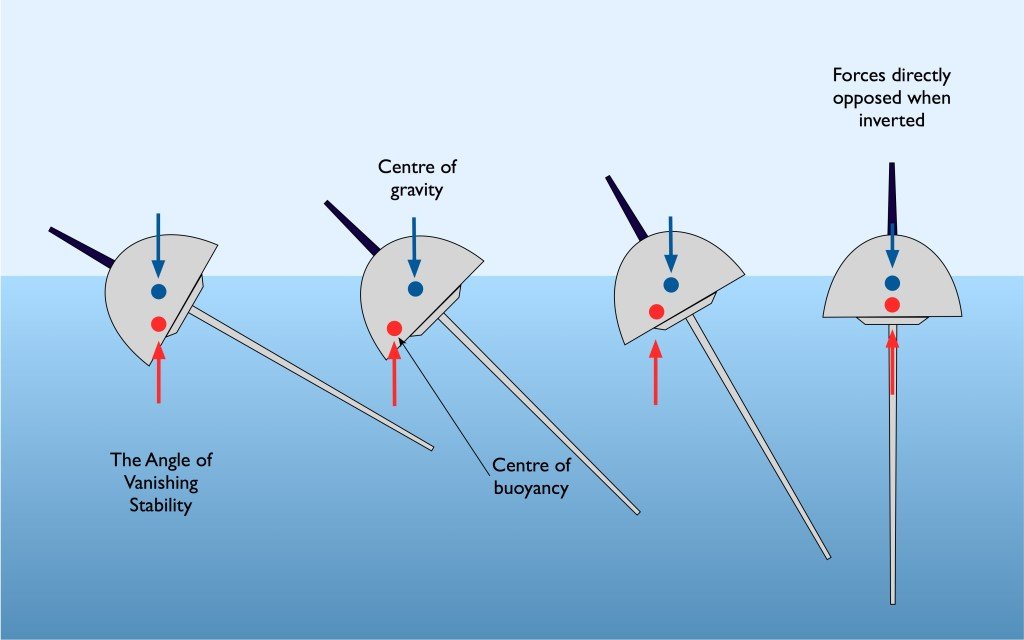 Boats with a high AVS will resist becoming inverted and return to the upright position quickly in the event of a knockdown. These include narrow, heavy displacement boats with a deep draft which can heel to 120º or more. Once capsized, only a small amount of further rolling moves the hull into the positive righting area and the boat comes back upright. Boats with wide beams and shallow drafts tend to have high initial stability but may capsize at 90º of heel and will not always be self-righting. 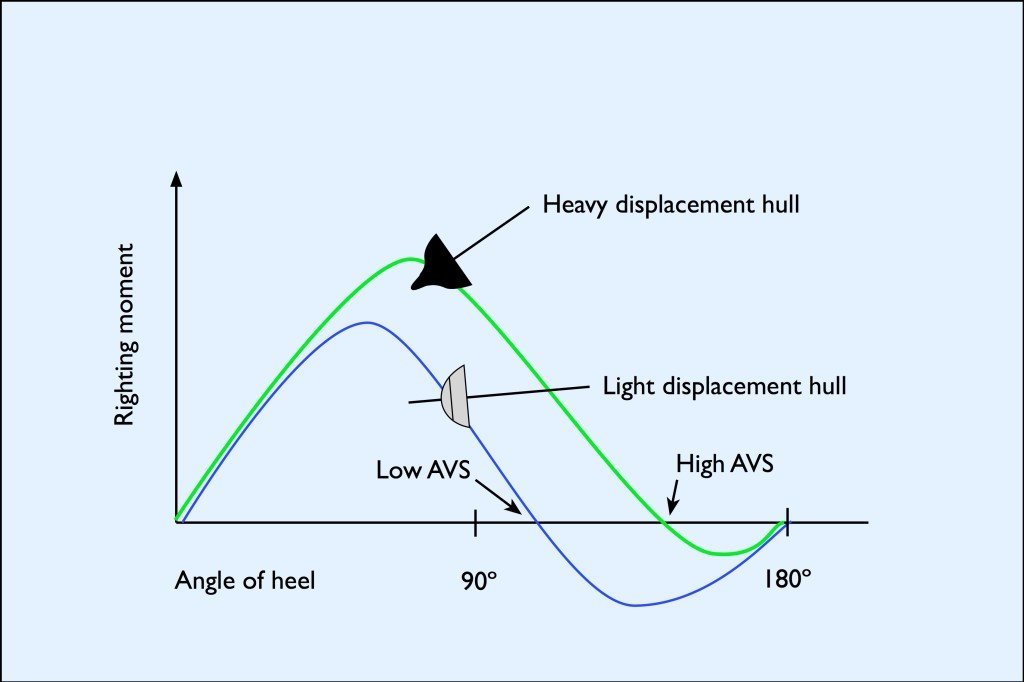 Boat manufacturers publish righting moment curves of their yachts to show the stability characteristics of their designs. In Europe the Recreational Craft Directive (RCD) states that pleasure yachts between 2.5m and 24m must carry builders’ plates to categorize their boats in either Category A (Ocean), B (Offshore) or C (Inshore) and meet minimum standards of stability.

Rules and regulations are one thing, but the force of steep breaking waves can knock any yacht down in coastal waters, especially if it is caught beam-on. Research has shown that the most significant factor in capsize is whether a wave is breaking or not. If the wave is greater in height than the beam of the boat, then it can easily knock the boat over. Tests carried out at Southampton University in England have shown that almost any boat can be capsized by a wave equal to 55% of the boat’s overall length. Such waves may occur where the seabed suddenly shelves towards the coast, or where wind is blowing against tide.

This research points to the fact that yachts seeking shelter often find themselves in greater danger when approaching harbours than when coping with a storm further out to sea.

If you are well offshore in rough weather, consider your options. If needs be, heave to and ride out a storm as the boat will be more stable and comfortable, but check you have sufficient sea room to drift downwind and are not approaching a lee shore.  Another option is to lie ahull, with no sail up and the helm tied to leeward. If conditions worsen then the next stage is to lie to a sea anchor or drogue, which will prevent the boat from meeting waves beam on and reduce the vessel’s drift rate.

Don’t automatically head for the nearest harbour or your intended destination. Check first what the conditions are likely to be there, by considering the state of the tide, wind direction and whether there are danger areas such as headlands and sand bars to contend with. Check out all the alternatives and be prepared to alter your plans in order to opt for a safe option.

SafeSkipper1 day ago
Keep your winches running smoothly! Read our essential guide to servicing - from cleaning, checking and disassembling, to lubrication and reassembly - including a very handy step-by-step guide to the process. http://ow.ly/gT2h50Ctt64 #boating #yachting #sailing

SafeSkipper5 days ago
⚓ Anchoring is one of the most important boat handling skills. If you don't anchor correctly you risk endangering your boat and others nearby. Read our essential guide here to getting it right here: http://ow.ly/v0iB50yhyXj #sailing #nautical #boating #anchoring

SafeSkipper6 days ago
Stay Safe on the Water - How to Avoid Collisions at Sea. Make sure that you're prepared and know what to do at the right time. Read more here http://ow.ly/sYsn50zU3zR #sailing #nautical #boating

SafeSkipper1 week ago
⚓ Anchoring is one of the most important boat handling skills. If you don't anchor correctly you risk endangering your boat and others nearby. Read our essential guide here to getting it right here: http://ow.ly/v0iB50yhyXj #sailing #nautical #boating #anchoring